What are Aboriginal Ceremonies About ?

Aboriginal Ceremonies have been the means of keeping the Australian Aboriginal culture intact for thousands of years.They are used to pass on rules and laws that are believed to have been handed down by the Dreamtime spirits.They are a part of life for those where the culture remains intact in the Northern Territory, Western and Eastern Desert tribes, Tiwi Islanders and in the Kimberley tribes of Western Australia.

They created features of the landscape as they moved across it. They also left ancestral teachings about tools, hunting laws, ceremonies and a totemic system among the tribes.

This totemic system dictates your place in the tribe and the ownership and responsibility for protecting and passing on each Aboriginal Ceremony.

As the Aboriginals had no written language, the Ceremonies, were the main means of transferring knowledge through the generations.

In the initiation ceremonies young boys begin their journey into manhood.

The boys are often taken into the bush so that the tribal elders can begin the process of passing on the laws relating to their country, spiritual belief and the role and obligations they have within the tribe.

The initiation may take many stages and years until the young males are considered by the tribe to be fully initiated men. 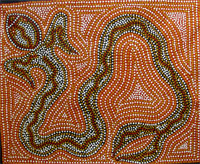 The information passed on in these ceremonies is considered highly secret and at the time of the ceremony whole areas may be closed to the public.

These Aboriginal Ceremonies are referred to, as Men’s business and there is also a similar series of ceremonies for women and called secret Women’s business.

The information passed on in these ceremonies is considered highly secret and at the time of the ceremony whole areas may be closed to the public.

These Aboriginal Ceremonies are referred to, as Men’s business and there is also a similar series of ceremonies for women and called secret Women’s business.

Another important Ceremony is the Funeral Ceremony.

Contact with Christian practices has seen a melding of the traditional Aboriginal ceremonies into that of Christianity.

The elders believe that smoking the house in which the person died, as well as the community clinic and vehicle or the last place a person was rids the community of the potential risk for his/her bad spirit. Conversely the smoking of where a new baby is born is also done.

A band of red ochre painted around the house and vehicle may also provide this protection.

There may be a Christian service along with the more traditional Aboriginal practices and it is not uncommon in Arnhem Land to see a fresh grave with flowers and the flags of the various tribes or if in the Tiwi Islands flowers and Pukamini poles.Whilst some of the Ceremonies are held in private and are regarded as secret some times as with the Initiations ceremonies some parts may be held in secret and then in the evening or at the end of the ceremony it may be open to women and children and even to non Aborigines.

These Ceremonies may also be held in public as an acknowledgement of Aboriginal ownership of the land to cleanse an area and provide blessing for such things as the opening of Parliament, Major sporting events, festivals etc.