Michael Tjapanardi Tommy was born in 1960 on Coniston Station (a cattle ranch or lease hold property) in the Northern Territory of Australia.

His father’s country is Mt Allan (Yuelamu) and it is from this region that he now lives and works.

He is very much involved with the Mt Allen Community Council and the Cattle Property Mt Allen Station.

Michael is married to Barbara Charles who is a very accomplished artist herself.

They sometimes work on pieces together.

They have a son Clifford.

Michael is a very strong painter with bold use of color and perspective his distinctive style is easily recognized.

He loves to paint large works, sometimes over 3 metre’s long.

His father’s dreaming, Perentie (lizard), is one of his main themes, but Honey Ant, Rainbow Serpent, Love Story, Emu and Carpet Snake also feature strongly in his work.

It has a spotted skin, long slender neck powerful legs with clawed toes.

They eat other small reptiles, bird’s small mammals and carrion.

It has a mildly venomous bite which can cause rapid swelling disturbances in blood clotting and pain.

It is found in the arid areas of Australia.

The Perentie has significance to the Aboriginals of the Western Dessert in their totemic relationships dreaming stories and as bush ticker.

They are a favourite food and their fat is used in Bush medicine. (In Australia anything out side of the city areas is called “The Bush”)

The Honey Ants are found in the desert and are a totem of many local artists.

They store honey dew in their swollen abdomen the women use their digging sticks to dig up their nests and bite into the ants to suck out the sweet honey nectar.

Michael Tjapanardi Tommy is a very good artist and we would have several of his paintings in Our Gallery. 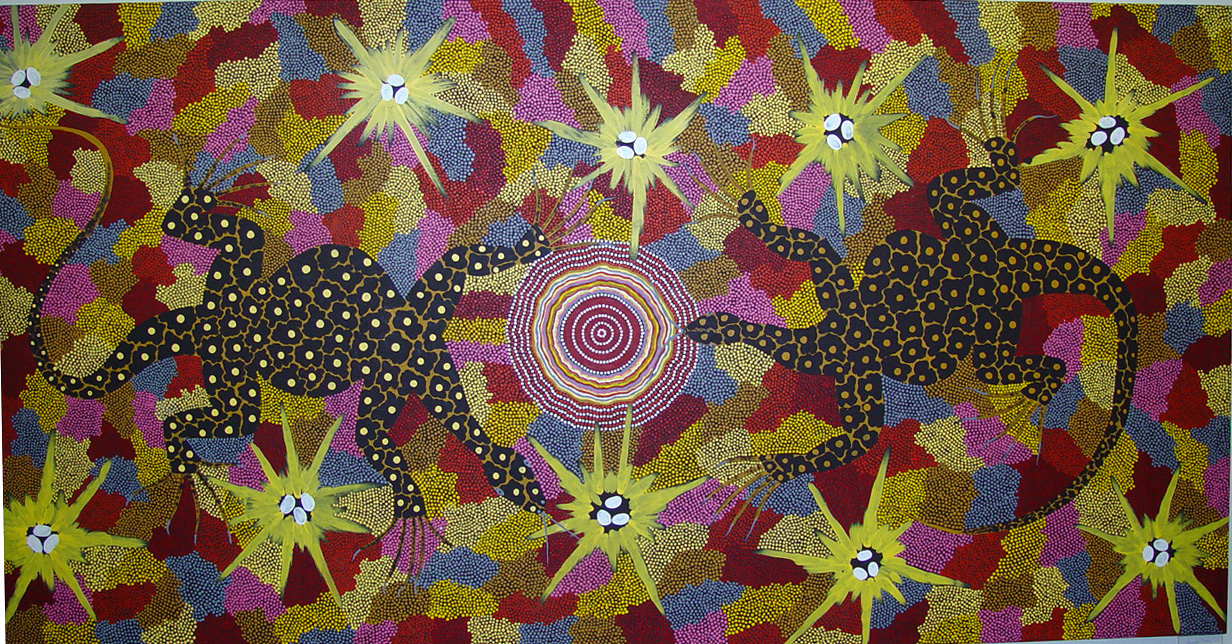